In the early 1700’s, the Reverend Archibald Stobo, a Presbyterian minister from Scotland was returning from an unsuccessful mission to the Isthmus of Darien (now Panama) when his ship stopped in Charleston for supplies. On September 3, a hurricane struck the Charleston coast and destroyed his 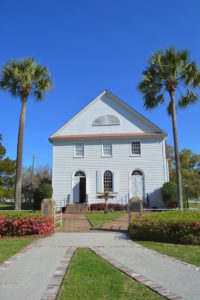 ship, leaving only Reverend Stobo, his wife, and a few other passengers alive. Soon after, Reverend Stobo accepted a pastorate at what is now known as the Circular Congregational Church in Charleston. In 1704 he resigned his pastorate to organize several churches on surrounding islands. One of the five churches he organized was Johns Island Presbyterian Church.

The original Johns Island Presbyterian Church building was erected in 1719. The bricks for the church foundation were brought from England as ballasts. The church was originally 38 feet long by 35 feet wide. In 1823, twenty feet were added to the length of the sanctuary and a gallery was added in order for the slaves to attend services with their owners. The slaves were received into membership by examination after two years under the teaching of the black leaders, three months under the special instruction of the pastor of the church, and upon receiving “tickets” from their masters certifying their good moral character, all of which were required before being allowed to unite with the church. The Bohicket Creek, which runs behind the church, made it easily accessible by water although some members traveled by horse trail, created by the Indians. 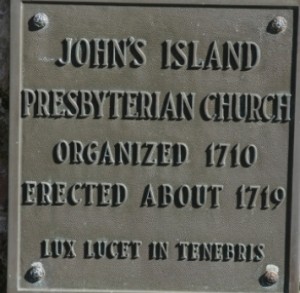 During the 1950’s the last two pews on the outside rows, made by a member of the congregation, were added in order to accommodate the increased membership of the church. Electricity became available on Johns Island in 1938 and soon after the sanctuary was wired for electricity and a few light fixtures were installed under the balcony.

On September 5, 1995, the process of restoring the sanctuary to its 1823 appearance began. The choir loft and the platform on which the pulpit stood was removed and the pulpit was restored to its original finish, dating back to 1770-1790 period. In 1823 there were 2 rows of pews at the front of the church which were perpendicular to the other pews in the sanctuary. During the restoration process, they were reinstalled, using the doors from the original pews. The numbers 17 and 19 seen on the pews represent the date of the original church. The front pew in the center section was replaced, having been removed in order to accommodate the choir loft in 1929.

The sanctuary is believed to be the oldest wooden structure, of any denomination, in Charleston, Williamsburg, New York, Philadelphia and Boston, the five major cities of Colonial America and has withstood an earthquake, the Civil War, the Revolutionary War, and numerous hurricanes.

Johns Island Presbyterian Church supported the first Presbyterian missionary to Africa in 1833, the Reverend Dr. John Wilson. Since 1728 the congregation has had 28 pastors. The church is listed on the National Register of Historic Places and is an American Presbyterian and Reformed Historical Site.

If you are interested in learning more about the remarkable history of our church, please stop by the church office and purchase a copy of Johns Island Presbyterian Church (The History Press, 2010). In this book, author Charles E. Raynal, PhD chronicles our church’s history from its founding by Rev. Stobo in 1710, following it through the dramatic events of the Revolutionary and Civil Wars, and sharing with readers the impact of our church on the Sea Islands today.